Earlier this year, a Kansas State University student sent a letter to the donors who awarded him a renewable 4-H Vanier Family Scholarship. That’s a $12,000 per year scholarship, but he didn’t write a traditional “thank you” letter.

Rather, Justin Schmutz of FarmHouse Fraternity sent the letter to explain he wouldn’t be applying to renew his $12,000 in scholarship money — money that would have helped pay for his senior year in biological systems engineering.

In the letter, Vanier said, Schmutz explained to her family and the scholarship committee that his goal was to graduate without any debt.

“I think I can do this without the help of your scholarship,” Schmutz wrote in the letter.

But Schmutz, who has already renewed the scholarship once for a total of $24,000 over two years, wrote how he had gone over his financial plan and knows how much he’ll need to graduate debt free.

“I think I can do this without the help of your scholarship,” Schmutz wrote in the letter, according to Vanier.

“What? He’s giving the money back? Really?” Vanier said as she explained her reaction to the letter. “And he was.”

In the letter, Schmutz wrote that he was not applying to renew his scholarship because “someone else could use the funding more than me,” according to the Kansas 4-H Foundation. He said he wanted to do the “right thing.”

The Vanier Family Scholarship Program, which started in 2016, is meant to recognize students who have “overcome challenges in their lives,” according to the program’s website. The scholarship covers 70 percent of a K-State education, according to a release from the Kansas 4-H Foundation.

The money is given to “young 4-H alumni who have overcome some adversity, overcome a challenge, shown some perseverance,” Jake Worcester, president and CEO of the Kansas 4-H Foundation, said during the announcement.

Schmutz had some challenging family situations in high school, Vanier said, but through the scholarship, he was able to become an active student at K-State and with FarmHouse Fraternity. Schmutz’s dad died before he started college.

Because of that, the Vanier family announced a new “Justin Schmutz 4-H Scholarship” in honor of his leadership and act of service.

“I am beyond proud of you for how you have managed to persevere through life and become a great man of the community, of God, and our family!!” Schmutz’s brother, Stetson, posted to Facebook. “What a cool cool opportunity for you to share your legacy and influence those around you!! … I really can’t believe a scholarship will now be named after you at such a very young age!”

After the announcement, Schmutz explained how it was one of his hopes that he’d be able to give back “after being blessed with several scholarships.” He hoped to do so by establishing a scholarship fund in his dad’s name. His dad, Ron, died in 2012, according to an obituary.

“This isn’t necessarily in his name … but it’s neat to see how I think that opportunity probably came sooner than I expected,” he said. “I hope I can continue to give back to it and others in that capacity.” 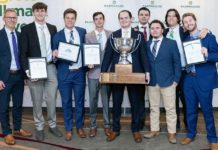 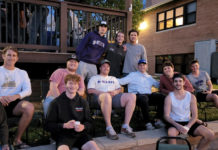