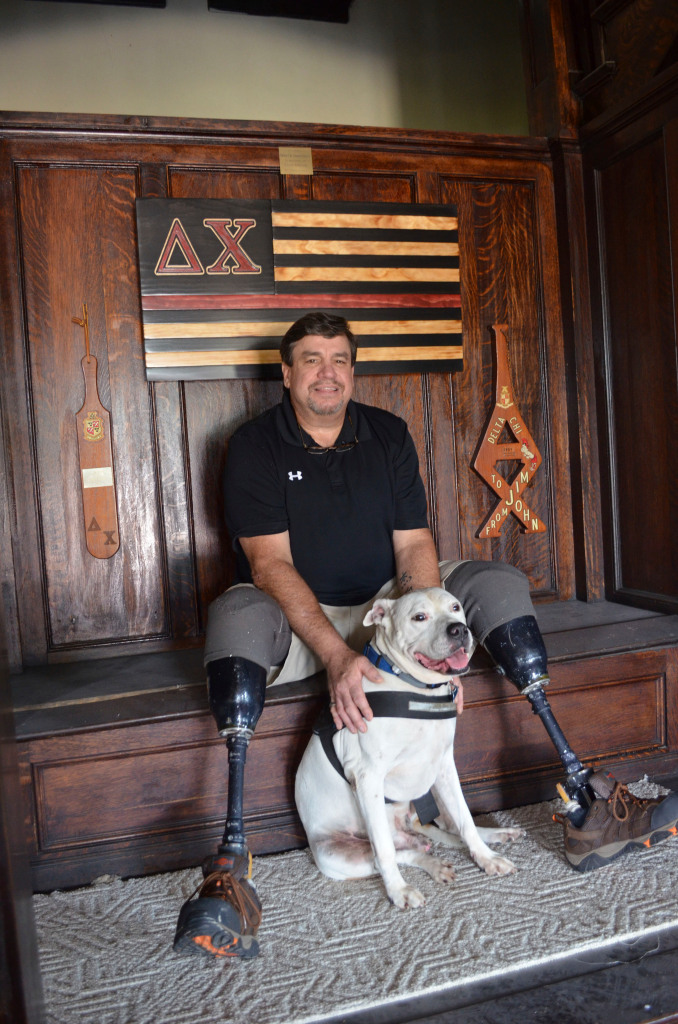 TROY, Alabama – In the blinking of an eye, Richard Mays’ life changed.

While unloading an antique dresser in the antique shop he owned in North Carolina, the heavy piece slipped and fell on his leg. The injury was not thought to be serious. The day was August 15, 2015.

In time, the wound began to fester and cause the Delta Chi brother pain. Soon, he needed the assistance of a cane and then a walker.

On December 29, 2015, his mother died. The next day, Mays was admitted to the hospital and was told that his leg was severely infected and had to be amputated.

“I had no choice,” Mays said. “I wanted to live, even without my leg.

Mays’ left leg was amputated, January 9, 2016, the same day of his mother’s funeral.

Mays was walking with a crutch and, then, one day, the heel on his right foot broke and then the  bone in his right leg.

“I was told that sepsis had entered my body,” Mays said. “The infection had gotten in the bloodstream and my right leg would have to be amputated to save my life. I wanted to live. Having my right leg amputated was my only chance.”

For Mays, living was more important that anything. He had two daughters he loved dearly and who loved him in return.

So, he canceled the pity party and went into rehab full speed ahead.

“At rehab, I told them that I was going to work them a lot harder than they ever thought about working me,” he said.

Amazingly, in five days, Mays was walking on his prostheses.

“I have never let the loss of my legs slow me down,” he said.

However, Mays knew that he might not have to slow down but he would have to rethink what he would do with his life.

Mays is originally from Montgomery. He is a graduate 1986 graduate of Troy State University and a member of Delta Chi fraternity.

In North Carolina, he was in marketing and sales in the tobacco industry, as well as in the antique business.

Mays said he began to consider the options available to a man with two artificial legs.

“I love Troy University and I am a dedicated Delta Chi brother,” he said. “I was excited when I learned that the Delta Chi Fraternity had purchased the former Delta Chi House on North Three Notch Street in Troy.  I began to make plans to participate in the first work party at the house.”

He came to the first work party and it was like being at home and among family.

“Several of us were standing outside talking and I noticed the old carriage house out back,” Mays said. “I casually mentioned that it would make a great place for a caretaker for the Delta Chi house and the property. And, they agreed.”

When Mays returned to North Carolina, he began to think seriously about the carriage house. He called the Delta Chi fraternity with an offer to be the caretaker of the place and also to assist with the renovation of the house.

Mays is handy with a hammer and he has a good working knowledge of carpentry work. He knows something about plumbing and electricity and, if anything needs doing, it’s a good bet that Richard Mays can do it.

The Delta Chi brothers evidently knew Richard Mays was just who they needed.

He talked it over with his daughters in North Carolina and they said, “Dad, go live your life!”Mays is now the caretaker of the Delta Chi house. He has been and is involved in the renovation of the historic fraternity house and he’s also the jack-of-all-trades at the Johnson Center for the Arts.

“Brenda Campbell is the director of  the JCA and she called and asked if I would be interested in working there doing whatever needed doing,” Mays said. “I jumped at the chance.”

Mays is the creative type and enjoys art. Both of his daughters are talented in the arts.

“Being here at the Johnson Center gives me the opportunity to meet people and to learn more about art and the artists,” he said. “And, when they need a handy man, I’m here.”

Back home in Alabama, in Troy and at the Delta Chi house is just where Mays wants to be.

He doesn’t think about the loss of his legs.

He just knows that he has been richly blessed to have family, friends who are as close as brothers, something to do and a place to be.

Homecoming parade goes off without a hitch 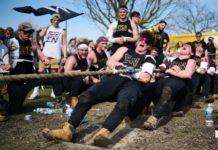