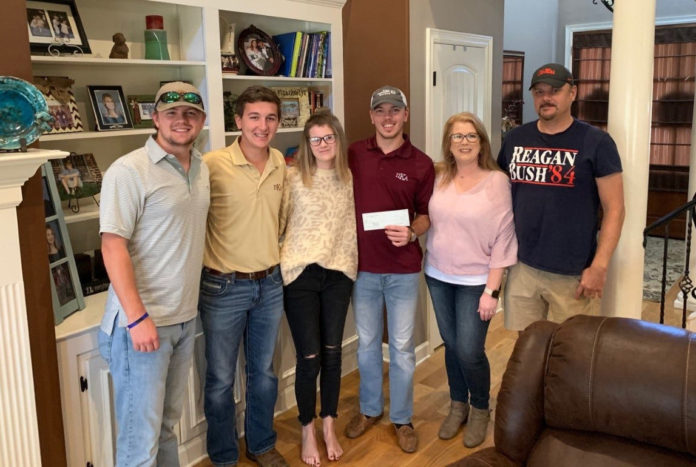 On the night of Aug. 22, Delta State University freshman Jenna Claire Fisackerly called her parents. The teenager had been busy — she rushed sorority the week before and had just finished her second day of classes.

“She was just super excited about that and loving it and we were excited for her,” said mom Missy Fisackerly.

An hour and a half later, her new friends called her parents back. Jenna Claire was violently ill. She couldn’t stop throwing up and her head and neck were hurting.

After a CT scan revealed Jenna Claire had a brain bleed, she was transported to Memphis Methodist University Hospital via ambulance. After a second CT scan, Jenna Claire underwent surgery to put a shunt in her head to drain the blood from her brain.

Jenna Claire was in the hospital for 23 days; 12 of those were in ICU.

“The whole time, all we could do was just look at her and say, ‘How in the world did this happen? How are we here?’ She just looked so frail,” Missy Fisackerly said. “She lost a ton of weight in those three weeks. It was just so sad to sit there and watch.”

The rupture affected Jenna Claire’s balance and vision and she now goes to four different types of therapy: Physical, vision, occupational and speech.

But her brain is still healing and the neurosurgeon told the family it could take up to a year for it to fully heal. Recently, Missy Fisackely said, she’s started to see glimpses of Jenna Claire’s personality.

On the weekends, Jenna Claire’s friends will often come and visit. Her family has rallied around her as well. Her older brother, a student at Mississippi State University, used to come home twice a semester. Now, he’s home every other weekend to check on his baby sister.

But before Jenna Claire was even back home, her Delta State family was thinking of ways they could help.

With Jenna Claire in therapy four days a week, Missy had to quit her job as a sixth grade teacher. To give back to the family, the brothers of the Pi Kappa Alpha at Delta State decided their annual fundraiser should benefit Jenna Claire.

The fraternity typically raises around $2,000 each year for their chosen cause. They had no idea they would raise 10 times that.

“I never saw us raising that much money but it’s not necessarily because of Pike that we raised it, it was a collaboration between us and the sororities. Without them, we definitely couldn’t have done it,” said Pike Philanthropy chair and sophomore Will Young.

During the weeklong fundraiser, the fraternity hosted a cycling event, a harvest carnival, a dodgeball tournament and a 5k run and obstacle course. But it was the social media challenge that really took off. They posted a link to donate around 8 a.m. Friday morning. By the time they got out of class a couple hours later, the post had been shared hundreds of times. Eventually, it was shared over 4,000 times, mainly by alumni and members of the fraternity from across the country.

Missy Frisackely said when the fraternity brothers first contacted her about the idea of doing a fundraiser, they told her it typically raised a couple thousand dollars.

They didn’t tell her how much was actually raised until they visited the family in South Haven to present them with a check.

“As soon as Jenna Claire’s mom opened the envelope and saw the amount…it hit home at that point. To me, being in the fraternity for three and half years now, it was the best thing I’ve ever done,” said Pike President Johnathan Kent.

“We opened the envelope and I thought, ‘Am I reading this correctly? Surely this is just twenty two hundred. When it said $20,200, I just said ‘Oh my goodness.’ I just cried and hugged them. I was in disbelief that it was that much.”

‘We have such a wonderful support system’

This holiday season is all the more special this year, Missy Fisackerly said.

“She’s got grandparents, aunts and uncles that all adore her and are so thankful she’s here,” she said. “Everybody is saying it’s the best Christmas ever. We’re getting to celebrate it with her. We’re so thankful, she’s just a huge blessing that for sure.

“It’s a huge miracle. We’re so happy to have her.”