Lt. Col. Jon Velishka, a member of Beta Theta Pi Fraternity, takes another sip of coffee. When giving a 9 a.m. lecture to University of Maine graduate students on complex issues of national security and foreign policy, it helps to be well caffeinated.

Velishka is helping teach this graduate-level course on the potential reunification of the Korean Peninsula with Peter Madigan, a lecturer in the School of Policy and International Affairs. Throughout the semester, the students will develop a strategy for addressing the various scenarios that might play out in real life, affecting millions of lives in North and South Korea. But for now it’s week two, and Madigan and Velishka are hammering on the idea of organizing one’s thinking.

“First, you have to define the problem,” Velishka says. “Identify all of the elements of the problem, then develop an approach.”

Velishka is back at UMaine a little more than 25 years after he first set foot on campus as an undergraduate student in secondary education in the College of Education and Human Development. During his time as a Black Bear he was on the track team and in the Army ROTC. He was a junior when he decided to join the Maine National Guard, which led him into the active duty Army, and what’s now a 20-plus year military career.

His service has included several overseas deployments, including during Operation Iraqi Freedom from 2003 to 2004. “That was probably the most boots-on-the-ground deployment, where I really got to interact with civil society in Iraq — everything from schools to public works,” he says.

When he returned to the U.S., Velishka was stationed at the National Training Center at Fort Irwin, California where he coached and trained fellow soldiers how to conduct counter insurgency operations and provide artillery fires, along with preparing them to conduct negotiations and engagements with Iraqi civilians. “It was really three years of me being able to observe, coach and teach, which was awesome,” he says.

He deployed back to Iraq in 2008, and also has served in Afghanistan, Kuwait, and most recently, the Republic of Korea.

Throughout his military service, he has leaned on his skills as an educator in a variety of leadership positions. “Leadership is education,” says Velishka. “A leader or an educator needs to continue to learn and grow to effectively lead and educate their team as in a classroom.”

In the spring, Velishka will return to the Korean Peninsula for another assignment, leading more than 3,000 American soldiers stationed in South Korea. In the meantime, he’s glad to help his friend Madigan teach a class on some of the very issues he’ll face on the ground.

Velishka and his wife, Tiffany, have two children — Arthur and Julia. When he decides to retire from the Army, he says they hope to settle in Maine, where he has great memories of his time as a Black Bear. “Just the support I received in terms of deciding to join the Army halfway through my junior year, to the continuing friendships I have with people from my fraternity brothers, the track team, ROTC,” Velishka says. “My best friends in the world are from UMaine. I’m just so thankful to continue to be involved with this community.”

Growing up, I had a couple really cool coaches and teachers. So I always expected to come to UMaine, be on the track team, and study to be a teacher, then go back to North Andover and be a track and football coach and go that route. Then I fell in love with Maine.

What was your major at UMaine and when did you graduate?
I graduated in May 1997 with a bachelor’s degree in secondary education with a concentration in social studies. So, along with my core education coursework, I took classes in political science and social studies.

How did you go from an education major at UMaine to the Army?
Like many kids I was paying for college myself, and I was thinking, “How can I do this better?” I was thinking of joining the Marine Reserves. But then I talked to Jack Mosher, who at the time was a captain and would later become a colonel in the Maine National Guard. He was also the live-in adviser for the Beta Theta Pi fraternity, where I’m a brother.

So then my plan morphed to be in the Maine National Guard and become a teacher in Maine somewhere, particularly as I did my student teaching at schools in Hermon and Glenburn. My adviser in the College of Education, Connie Perry, and former dean Anne Pooler were fantastic role models as well. They really let me explore my own path.

After joining the National Guard and going through basic training, I came back and was still pursuing my education degree here when I joined the Army ROTC. That’s when I really started to feel like I might like to pursue a career in the military.

Did you work closely with any other mentor professors or role models who made your UMaine experience better?
Lt. Col. Jeff Wright and Capt. Carl Reed with the Army ROTC at UMaine — they were great coaches and mentors — and Jim Ballinger and Rolland Ranson, who coached track and field. That team of mentors has been something I’ve tried to emulate for the last 20 years essentially.

During your military career, how have you applied what you learned as an undergraduate student in education?
I didn’t realize at the time, but education and the military are very similar. A lot of what we do in the military is growing and developing people, which is a lot like teaching. I feel I am able to relate really well with that college-age student population, which is similar to the demographics of soldiers in the military.

If I were to equate what I’ve done in my career to a teacher, for the first few years you have to work really hard on your tradecraft, become a tactical expert, and then after a few years you’re able to see how your tradecraft fits into other elements of the big picture. So for a teacher, first you have to work really hard to set up your classroom, know and rehearse the delivery of the curriculum. Then you start to learn more about your students and really try to hone and improve their critical thinking skills. You also begin to realize that not everyone learns the same way — some people like a picture, some people like to read, some people like a hybrid. So over time, whether you’re a high school teacher or someone like me, working with every rank of the military, you learn to condition yourself so you know how to best communicate with people, so they can process and understand the information you’re giving them and use it to learn or make decisions.

How would you describe the academic atmosphere at UMaine?
It goes back to the core group of mentors I was telling you about. I was allowed to push on the doors at my own pace, but boy did they nudge me to push a little harder when I needed it. I was given plenty of room to explore personal passions, while having a cadre of professional and educational leaders who were vested in my success. There was a certain feel of an education-life team helping achieve my goals.

What was your most memorable UMaine experience?
Other than meeting my bride of 21 years, Tiffany, there are two that are very heartfelt. First, when I needed to go off to basic training during the spring semester of my junior year, I walked into Connie Perry’s office and I said, “Ma’am, I really don’t know what to do here.” And she said, “This is absolutely doable.” And within the next day or two she had signed all the papers to let me take a semester break to go to basic training, and then come back and crush the rest of my degree. The fact that she was so caring and understanding let me know that everything would be OK.

The second thing is at graduation. I was there with folks from the college of education, from ROTC, guys on the track team, guys from my fraternity. The whole UMaine community came together, and I strive everyday not to let them down.

How does UMaine continue to influence your life?
The UMaine Black Bears are like family. Without any one of the individuals who were part of the community when I was here, I wouldn’t be the person I am today. And they wouldn’t exist without the UMaine community either. So it’s a cycle of community and support that I’m proud to be a part of today.

What advice do you have for today’s UMaine students?
Explore your passions while being grounded in something bigger. Always strive for a higher aim and purpose. You can study to be a teacher or an engineer or a nurse, and you can become as much of an expert in that as possible. But always look across the university, know what else is going on and learn about it, because there’s so much cool stuff happening at the University of Maine. You can learn from all sorts of different people, and have all sorts of different mentors. 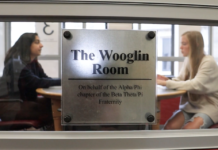 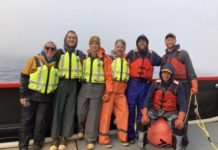