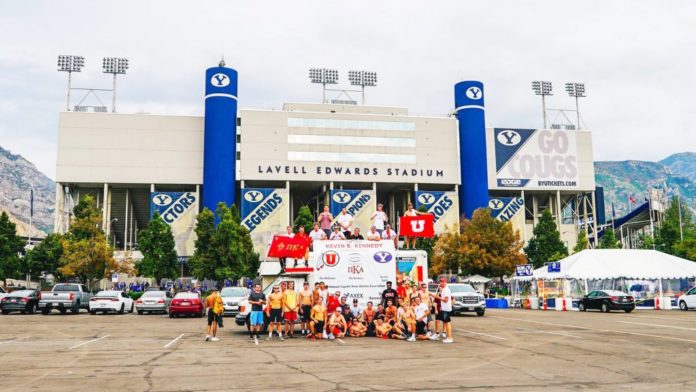 For one The University of Utah fraternity, the yearly game between Utah and BYU is about more than winning or losing to a rival. Whenever the game is scheduled, the members of Pi Kappa Alpha band together for the Kevin B. Kennedy Gameball Run, its largest philanthropic event of year.

By tradition, the run commences at either Rice-Eccles or LaVell Edwards stadiums and ends at that year’s host campus. This year 100+ members of the fraternity ran a football relay-style for more than 40 miles, from Salt Lake City to Provo on Saturday, Aug. 24, 2019. The money raised from the run will be donated to Camp Hobé.

“While this game ball run isn’t our longest-running tradition, it’s one of our most important legacies to continue,” said Riley Elliott, 2019 president, Pi Kappa Alpha. “For the last 25 years, our fraternity brothers have honored Kevin B. Kennedy with this run and making this donation to a worthy cause. We know Kevin and his family are proud of the money we continue to raise for children fighting cancer.”

Described by his fraternity brothers as “a natural-born peacekeeper,” Kevin Kennedy joined Pi Kappa Alpha in 1989 and succumbed to brain cancer in 1994. Two years after his death, Kevin’s younger brother Kelly also joined Pi Kappa Alpha where he met his “big brother” Greg Hopkins. The two quickly connected when it was discovered that Hopkins had also battled cancer as a young man and was fortunate enough to beat it.

Hopkins told stories of his time at a local Utah camp called Camp Hobé, a specialty camp for kids and teens with cancer and other terminal illnesses as well as their siblings. After learning about the mission of the camp, it was unanimously voted to change the fraternity’s philanthropic partner to Camp Hobé.

“Camp Hobé is an organization which is especially meaningful to me,” said Kelly Kennedy. “I love being able to support something that is both important and local.”

At the end of the event, the Pi Kappa Alpha leadership were hoping to out-raise their 2018 donations. Those amounts from sponsors, students and community members are still being tallied. If you would like to donate, visit the Camp Hobé donation page.